This contract provides the following value items for the NEAR community:

Helps stakers avoid putting all eggs in one basket

This contract acts as a staking-pool that distributes it’s delegated funds to several validators. By delegating to this contract, you greatly reduce the risk of getting no-rewards due to validator outages and you contribute to decentralization and censorship-resistance. Besides staking rewards, while staking you will receive $META tokens. (Automatic Farming)

This contract allows users to skip the unstaking waiting period by providing a liquidity pool for liquid unstaking. This simplifies NEAR staking, making staking and unstaking simple and immediate.

This contract tokenizes, liberates your stake while keeping it generating staking rewards. It allows you to use it to operate on markets or to use it as collateral.

Contributes to decentralization for the NEAR network

This contract includes a liquidity pool and the opportunity for liquidity providers to earn fees. The liquidity pool is a stNEAR->NEAR swap pool, providing the Liquid Unstake functionality and generating fees for the Liquidity Providers.

This contract integrates two NEP-141 tokens: stNEAR, staked-NEAR and $META, the project token. $METAs are farmed automatically. If you use the liquid unstake function, you’ll receive $META; if you stake, you’ll get $META with your staking rewards; if you are a Liquidity Provider, you’ll get $META with your fees. There’s also a $META multiplier: early liquidity providers will receive more $META than late adopters.

At launch time and for a limited period, the multipliers are:

Validator Loans: a safety-net to avoid losing validators on the seat-price cliff

This contract will allow struggling validators to keep a seat and keep validating in case of sudden rises in seat price. There will be staking-loans available for whitelisted validators and also emergencies stakes from the liquidity pool. Pools requiring staking will have to pay x-epoch rewards in advance. Fees paid will be distributed as rewards between the stNEAR holders and/or the Liquidity providers.

Users wanting to unstake skipping the waiting period can do so in the stNEAR->NEAR Liquidity Pool.

In the Liquidity Pool:

The stNEAR->NEAR Liquidity Pool is a one-sided Liquidity pool. Liquidity providers add only NEAR to the liquidity pool. The pool allows other users to perform “Liquid Unstakes”. During a “Liquid Unstake” users send stNEAR and receive NEAR from the liquidity pool, minus a fee. The fee represents how much users value skipping the 39-52hs waiting period to receive their funds. The fee varies with the amount of NEAR in the Liquidity Pool, but the curve is capped at the extremes. Initially, discount fees are in the range 3%-0.3%, but the curve parameters can be adjusted by DAO governance. 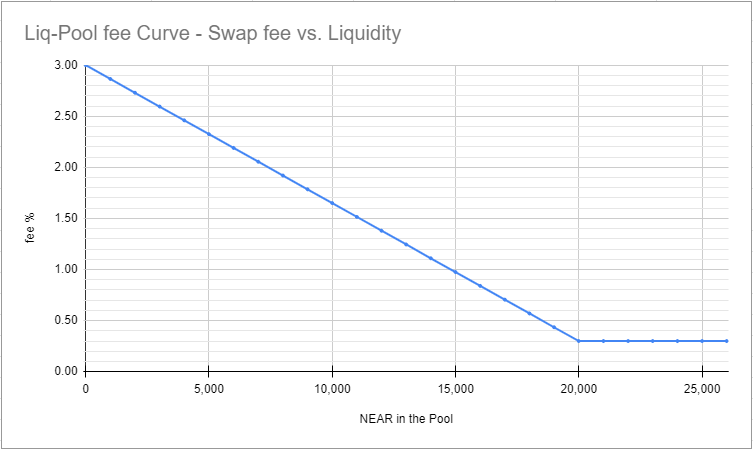 This contract tokenizes your stake, allowing users to use their staked near as a NEP-141 TOKEN, called stNEAR.

stNEARs represent staked NEAR. The amount of stNEAR you hold is automatically incremented each epoch when staking rewards are paid.

This contract also includes a trip-meter functionality, so you can precisely measure staking rewards received, regardless of stake and unstake movements you can make. The rewards trip-meter will show you the exact amount of your staking rewards without being affected by staking and unstaking movements in your account.

This contract also acts as a standard staking-pool, so users can perform classical stakes and classical unstakes.

By implementing the standard-staking-pool trait, lockup-contract accounts can delegate funds here, gaining risk reduction and greatly contributing to NEAR decentralization. Note: Lockup contracts can only perform classic stake/unstake so Lockup contracts can not access the liquidity pool or buy/sell stNEAR.

The contract pools all users’ funds and keeps a balanced distribution of those funds in a list of whitelisted, low-fee, high-uptime validators.

The contract includes a swap pool called the Liquidity-Pool. When users perform a liquid-unstake, the swap some of their stNEAR for NEAR in the liquidity pool, providing a fee to Liquidity Providers. Liquidity Providers indirectly get the stNEAR+fee and deliver NEAR. No stake/unstake is performed in that process.

stNEAR: one stNEAR represents one staked NEAR. A stNEAR is a virtual token computed from the user’s share in the total staked funds. By staking in the Meta-pool a user mints stNEAR, by unstaking, stNEARs are burned. When staking rewards are paid, new stNEARs are minted and distributed.

— To STAKE is to mint stNEARs —

— To UNSTAKE is to burn stNEAR —

There are two ways to unstake: (from more convenient to less convenient)

These operations are reflected in the UI in two steps that the user must complete with 39-104hs between them: [Delayed-Unstake::start] and [Delayed-Unstake::withdraw]. The UI informs the user the waiting period before confirmation, and also the remaining hours during the wait period.

In order to provide Liquid Unstake a Liquidity Pool is maintained by the contract:

Part of the LP fees go to the DAO Treasury. Treasury funds are always stNEARs and used for:

$META holders can vote on:

Users get $META tokens minted for them when:

$META governance tokens are minted and distributed to:

Periodic calls to distribute_staking()/distribute_unstaking()/withdraw_from_a_pool() are required for this contract operation. These calls consume considerable amounts of gas that is paid by the operator account. To fund this operational cost, a operator’s fee percentage (0.3% by default) is taken from rewards distributions. It can be adjusted by DAO governance.

The contract has a configurable parameter dev_maintenance_amount, initially 400 stNEAR, to be transferred monthly to the account developers.near. By DAO governance, this value can be increased and up to 50% can be redirected to other maintainers and contributors.

Alice wants to stake her NEAR with low risk, and also help the community by promoting decentralization and censorship-resistance for the network.

Alice stakes 750,000 NEAR in the meta-pool. Her 750,000 NEAR are distributed between the staking-pools by an automatic distribution mechanism to keep the validators balanced. She gets 750,000 stNEAR tokens.

She starts earning staking rewards on her stNEAR, she can track precisely her rewards. She will also get $META tokens on each reward distribution. By having stNEAR she has tokenized her stake, she can participate in other markets, and also she can Liquid-Unstake some of her stNEAR skipping the waiting period if the need arises.

Bob already has staked in the meta-pool. He holds 10,000 stNEAR earning staking rewards.

Carol is an investor. She wants to provide liquidity for the Liquid-Unstake function for a short period, earning swap fees. Carol deposits 7,000 NEAR in the Liquidity Pool, she is the first in the pool, so she gets 7,000 shares of the Liquidity Pool.

Carol share value has increased and now she owns some stNEAR via the Liquidity Pool. Carol burns all her shares and retrieves 2,000 NEAR and 5,050 stNEAR into her account. Carol has now 7,050 NEAR. Carol earned 0.7% in a few epochs. Had her normally staked 7,000 NEAR, she would have earned only 0.1% in the same period.

Dave is a Liquidity Provider. He wants to provide continuous liquidity for the Liquidity Pool, in order to earn a fee on each operation.

Being a Liquidity Provider can bring-in more earnings than just staking, while helping the community at the same time by providing liquid unstaking for other users.

The Liquidity Pool delivers 50,000 NEAR to Eve and acquires 50,500 stNEAR from Eve. The Liquidity Pool has a low amount of NEAR now. During the epoch the liquidity pool uses an internal clearing mechanism to acquire NEAR by selling stNEAR and restore liquidity automatically. After several operations, the liq-pool will have liquidity restored at 100,500 NEAR.

As the Liquidity Pool operates, the NEAR amount grows, so do Dave’s share value. With each operation $META tokens are also minted for Liquidity Providers, so Dave and the other providers get $META tokens besides the fees.